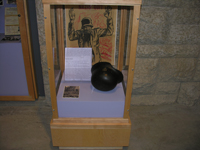 The cartoon celebrates the defeat of Nazi Germany, a form of Fascism which originally fused German ultra nationalism with socialist elements. When it took power in 1933, however, the Nazis persecuted Socialists as well as Jews for their alleged role in the defeat of Germany in the First World War. Based on racial pseudo-science, the Nazis wanted to annihilate harmful “races” such as the Jews and Roma and subordinate inferior “races” such as the Poles, Ukrainians, Russians and Serbs. The Nazi state provoked World War II by trying to regain territories it lost after World War I and then working to create a German empire in Europe.

The German helmet was brought back by a Canadian soldier and donated to our museum.