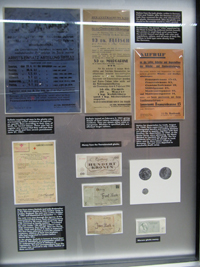 Tallit (Jewish prayer shawl) from the Theresienstadt (Terezin) ghetto. It was taken from a pile of talleisim by Martha Mannsbach, one of the few survivors of the ghetto, who kept it in memory of those who perished. Martha was in Theresienstadt in 1942 and remained there until the ghetto was liberated in 1945. (Centre)

Copy of a postcard sent by Dina Steinberg from Izbicka concentration camp, near Lublin where she was imprisoned, to her sister in law Martha Mannsbach. The card reads,”I am well, everything is fine, thanks for the parcel, Dinchen Izbickda, July 26, 1942. The initials are those of a camp officer, approving the contents of the card before it was sent. Dina did not survive Izbicka. Martha gave the postcard to a non-Jewish friend when she herself was transported to Theresientstadt Ghetto, later in 1942. It was returned to her after the war. (Centre, upper row, under tallit)

Work identity cards issued to residents of the Lodz Ghetto. People had to carry the cards with them at all times. When the Germans occupied the Polish city of Lodz, they changed its name to Litzmannstadt after the German general who led the occupying forces. (Lower row, left and centre)

Camp inmates were also given soaps like this. They were told the soap was made from human fat; this was not in fact, the case. However, telling them so was yet one more of the many means employed o dehumanize and humiliate prisoners.

Handkerchief and wallet collected after liberation, from the storage area at the Mauthausen Concentration Camp, Germany by Mendel Stzernfeld (upper left)

Soap given to Camp inmates (right)

Soap made from stone at Dachau Concentration Camp